The Value of ‘T’s in Learning to Find Love

Years ago, before I discovered Learning to Find Love and the importance of T’s, I was single and met a man I was interested in dating. We each went to the same concert one night but separately. I was entranced by the singer’s performance and was irritated by the applause at the end of the show – she had cast such a lovely spell, I wanted everyone to stop clapping so the magic could embrace us all.

The next day I received an email from the man I was interested in. When telling of his experience at the performance, he shared, “the applause seemed to be a really distracting tear in the veil of light she had woven.”

I think I fell in love in that moment. I didn’t know it at the time but he was clearly exhibiting one of my top T’s. I made a collage of that line from his email, it became a keepsake and we became a couple. It turned out he was loaded with my T’s and despite our struggles, I fell in love with him over and over again as 12 years passed. The struggles eventually won out and I broke both our hearts; I left him three and a half years ago. I’ve tapped lots on letting go of that love, it’s one of the hardest steps I’ve taken in life and has been a process of much learning and growth. Learning to Find Love helped me better understand what worked well in the relationship as well as why I needed to leave him, why our struggles were so pervasive.

Two years ago I picked up the last of my boxes from his storage. I was free to move on. But he texted a few months later to say that he found two more of my boxes. Our energies were still entwined. Winter came then the pandemic hit. I attempted to retrieve the boxes a couple of times but something always got in the way. I was surprised early this June to get a text from him saying that he was driving by, he could drop the boxes off. Wow, it was really happening.

Lonely and full of pandemic uncertainty, I dropped into focusing on what I knew; I mourned the loss of that love, built up and sustained by his T’s. I was surprised by the feelings that came creeping back after I had let so much go. I retrieved the boxes and held it together, not wanting to draw him into whatever it was I was going through. I got home and opened one of the boxes. There on top was the collage, I crumbled in tears. 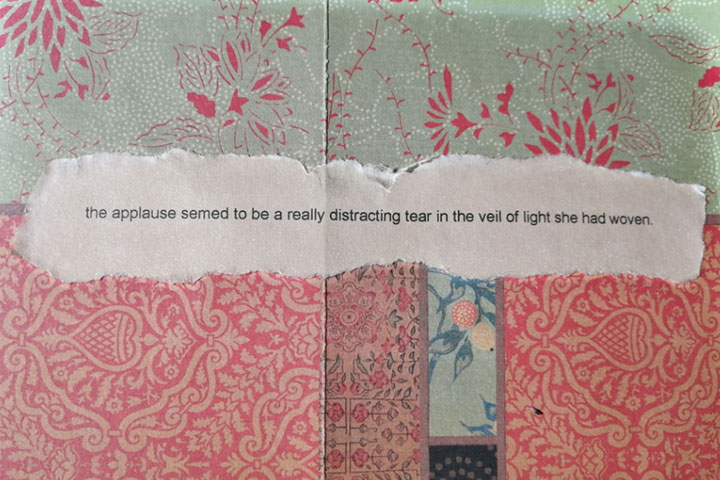 His T’s still had a hold on me. Through more tapping I reconnected with our struggles – he was a work addict and although he treated me like a queen, work was his first priority and consistently got in the way of us. As in love and comfortable as we were with each other, ultimately we weren’t compatible. I looked at my precious collage and realized it was time to release it.

On summer solstice I walked down to the river with my treasure. I savoured it one last time, grateful for the beauty we had shared, then I tossed the collage in. The river took it, turned it, and then drew it deep, it was gone, swallowed whole.

Two golden yellow butterflies danced by together entwined in the breeze. I sat and watched them tail away thinking it was an omen of new, true love around the corner for me. As I got up to leave, one golden yellow butterfly flew back towards me. It flitted to my side and then off along the path home. I thought, oh no, a lone butterfly, what does that mean? As I write these words, I settle on this meaning: now I am free to move on.

If you’re feeling baggage from past relationships holding you back,

If you’ve had it with dead end relationships,

If you’re tired of settling for less,

Regardless of your age and stage in life, you can attract true love, a happy, healthy lifetime relationship with your best friend and romantic partner.